Is T.D. Jakes a False Teacher?

This man is one of the country’s most renowned Pastors. He has a mega-church with 30,000 in membership, he’s written over 50 books, 15 of them on the New York’s Best Selling list. He is esteemed by the Christian community. He has received many accolades for his service in the name of Jesus. Most people would say “if everybody else accepts him, then he must be tue”! But is Bishop T.D. Jakes a false teacher?

Now one could easily state that if the world is loving him, then that should be the alarm by itself. The Bible tells us that the world does not love Christ.  This also means that the world won’t love His followers either, especially those placed in a role of authority to teach the Word of God in truth and Spirit. This fact has been proven to be true consistently throughout history with the many martyrs that have been killed in the name of Christ. This world does not accept that there is only way to for redemption and to heaven. Anyone holding true to that fact will not be accepted by the world who rejects it. So why is T.D. Jakes?

We’re not talking about the general church public. We are talking about the influencers of this world. The ones that are steering the world in the direction for the rule of the AntiChrist. Why are they promoting someone who pushes doctrine away from what they have been promoting? Why would they now change history and start allowing the true gospel to be understood by the masses through their networks and funds?

They wouldn’t. It’s much easier for them to take a man already trusted by the mass community and give him a larger platform. A platform where he is able to twist the doctrine, but because the masses do not have a full grasp of sound doctrine, they’re easily manipulated to accept the lie. People do sell their souls for fame and fortune. Please read the article “Selling Your Soul is Not a Cliché”. The goal is to change the thought of believers not grounded in strong doctrine and stray them away because of worldly authority. The message seems pure but it is purely satanic and New Age philosophy.

Now how T.D. Jakes started out and what he preached about in the past, we can not comment on. Was he ever sincere and true to sound doctrine? We do not know and make no claims on it. We only reference him on this site because of his new platform & affiliations that is placing massive deception throughout this country. Our goal is to break bondage of false doctrine and false teaching that Jesus spoke about to His disciples.

As T.D. Jakes has gained popularity through associations with Oprah Winfrey, the last 3 U.S. Presidents, and Hollywood, his influence has grown exponentially. He has been praised as the most influential African-American of our time according to “The Atlantic”. He is now mainstream with the ability to influence the masses that trust him because of his supposed role and title. He is the epitome of a wolf in sheep’s clothing. Talking as an authority figure when it comes to the things of God, people trust that this man is spreading the true gospel. 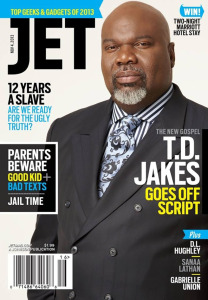 First off, to any discerning Christian this would tell it all right here. “Goes of Script with The New Gospel”? There is no “New Gospel”. Matter of fact any reference to a new gospel is blaspheme. Any believer in God’s Word should be able to decipher that.

Let alone a Bishop of a mega-church of 30,000 members. If the Gospel was truly his main point in life as his role states it is, this could never happen. We can never forget what the Word of God states a Bishop should be. Also when a teacher of God’s Word is said to have “gone off script”, this is what the definition of a false teacher is.  Case is closed, the Christian community should now more than ever hold him accountable for all his teaching.  The case should be closed.

But let’s give him the benefit of the doubt that he had no control of the cover.

Let’s examine what he talks about and promotes as a spiritual leader. When you see him on television on Oprah’s Lifeclass or other programming, he does not refer to the gospel at all. He doesn’t even have a bible. He talks as the guide itself. As the man of authority that has the answers. On Oprah’s Lifeclass they even display his quotes with a resemblance of scripture formatting.

In his speaking engagements, he talks about the power of thinking and attitude. The power of the secret drive within. He does not even refer to the Holy Spirit. He does not even refer to the power of God. He refers to the power being in everyone. It is extremely blasphemous doctrine that comes from a figure that we call “Bishop T.D. Jakes”. We encourage you to view these programs with discernment and understanding of the sound doctrine. 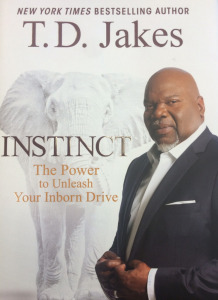 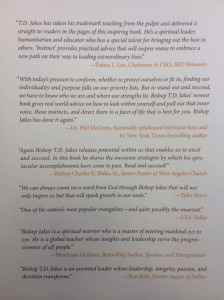 His most recent book “Instinct” by itself should bring the point home about his false doctrine. Please read the descriptions above. Ask yourself “How does God get the glory from this book?” This book promotes power within. It promotes obtaining inner knowledge that you have not accessed yet. It promotes illumination. These are New Age philosophy teachings.  He even sells a workbook to coincide with the book.  He markets it to Christians.

Christians following this man and his doctrine are unknowingly accepting false doctrine and a conversion of their religion. They are being exposed to such extreme false doctrine that they will inevitably not know the True God and what He desires for us.

God does not want us to rely on ourselves. He wants us to rely on Him. Trust in Him. The only way we are saved after death is through the belief in Christ. The only way to access the pleasures of our heart on earth is through the Holy Spirit. It’s the Holy Spirit, not inner knowledge that takes us the next level and brings us peace. We just have to listen to it and understand God through His Word, not through man.

This is sound doctrine that a Christian leader should represent in the very least. When you hear of “Christian Leaders & Teachers” avoid the Holy Spirit. You should avoid them.

Lastly many of you may say that this doesn’t matter because you have never listened to T.D. Jakes so it does not affect you. This is fine and a good thing that you have not been exposed to this false teacher, but you must love the rest that have been exposed. Help others break away from false doctrine and false teachers leading them astray. There is no greater risk than for a believer to lose his crown and have Jesus say “I never knew you”.

Is T.D. Jakes a False Teacher?